Early antique furniture was primitively constructed out of solid, often re-using old pieces of timber. Antique furniture construction, up to the early 1700’s was mainly built using pegged construction (wooden dowels) or simple mortise and tenon joints, also steel clout nails were seen in pieces of antique furniture. During the 17th and 18th centuries the provincial tradition was often slower to change but the construction was becoming more sophisticated, with finely executed joints and the interior was as well made as the exterior. By the early 19th century the prohibitive expense of craftsmanship, though difficult to improve upon, resulted in the rise of the production of machine-assisted furniture and especially used in Edwardian furniture. Below is details of how different types of furniture construction changed through history.

Early antique chest of drawers are characterised by their thick sides or ‘linings’, which were usually channelled so that they could run on bars or runners fixed to the sides of the carcass. The angles were usually nailed together, and were sometimes canted. During the 17th century, iron nailed joints were gradually changed to dove tail joints, whereby two sides are joined together by interlocking, triangular shaped wedges. Earlier drawer linings were large, crude and dovetail joints became increasingly small and tight during the second half of the 17th century. Such  thin drawer linings could no longer be channelled on the sides, and from the mid 17th century runners were placed beneath the drawers at each side; these ran on further bearers attached to the inside of the carcass. While English antique furniture was usually made with dust boards (generally of pine, that divided and sealed each drawer), French and continental furniture was often left open inside the carcass once the drawers were removed.

What is a Dovetail Joint in Antique Furniture?

Most quality pieces of antique furniture will have a dovetail joint in the drawer construction as it was a very early form of construction, but was so successful, it was used for many 100’s of years. The Dovetail joint, got its name because of its similarity to the shape of a birds tail. The Dovetail joint is a highly skilled bit of cabinet making and is extremely strong and interlocks securely to connect two pieces of wood, usually drawer fronts and sides, or corners on chest carcasses.

Originally they were done by hand, cut using a small saw and chisel, stuck using animal glue. This method can be seen as far back as the Egyptian times found on the furniture entombed with mummies, in pyramids and in furniture built for Chinese emperors.

The English cabinet maker first started using the dovetail joint in the mid 17th Century on walnut furniture and carried on doing this by hand until the late 19th century when they were produced by machines, mainly in the Edwardian periods. This was used in all woods from country pine and Oak to more fine Mahogany and Walnut timbers. You can get an idea of the date of a piece of antique furniture by looking at the dovetail joint, as if it is hand cut you know its pre 1880 and the more primitive the cut usually means an earlier piece.

Below you can see examples, the first is a 17th century drawer, pre dovetail so very primitive clout nails used. 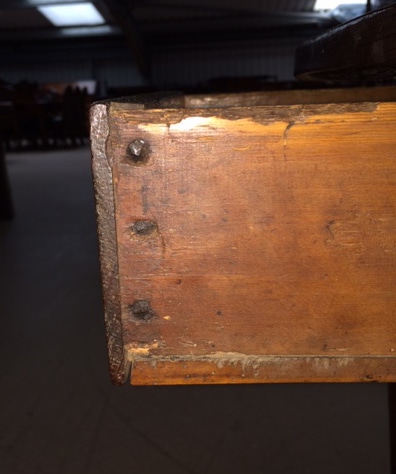 Next is a Georgian drawer with hand cut dovetail and you can see irregularities in the cut and shapes. 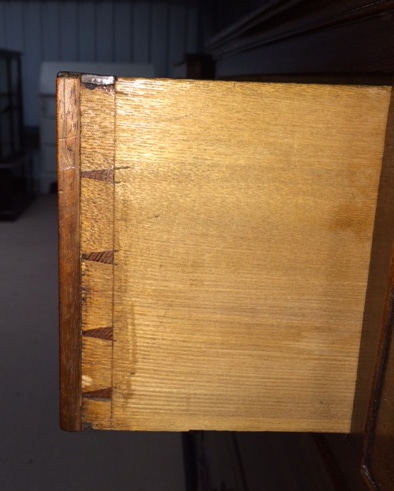 Next is an Edwardian dovetail, machine cut, more neat and even in shape. 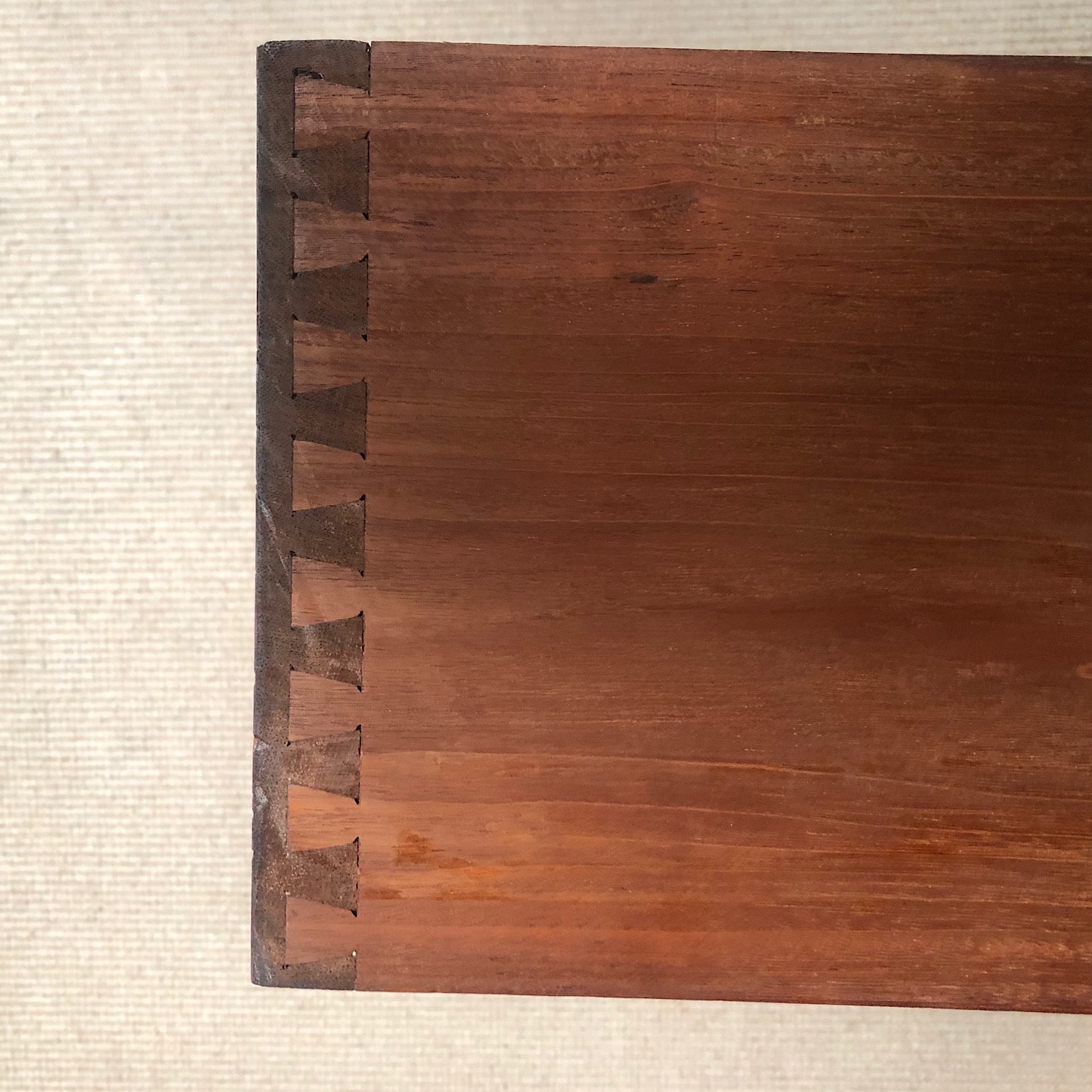 Until the end of the 1600s, antique chairs were constructed out of solid timber with pegged tenons. Early English walnut chairs usually had broad, hand sawn rails, but as the 18th century progressed the rails became smoother and narrower. Usually designed with drop-in seats that could be supported on the recessed lips of the wide seat frames (drop in seats), early 18th century English antique chairs are unique in that their legs have tenon joints and are glued but not pegged. The back uprights or were often made of one piece of timber with the back legs, in order to strengthen the chairs. Splat back chairs have uprights that have shaped top rails supported by the vertical baluster splat, similarly tenon joints to top and bottom. The large corner blocks in the corner of Queen Anne chairs were gradually replaced by diagonal cross struts that could also support the drop in seats. This enabled the rails to become increasingly thin and still a good sturdy construction.

Antique tables are traditionally constructed with a fixed top, which is supported on a frame with a frieze and legs. They were initially made in the solid, but from the late 17th century veneering was becoming very popular. The fixed traditional form was very fashionable with ornament but it was not so adaptable to the smaller, lighter tables required for occasional use. The late 1600s saw,  two variations of the traditional form of table: the gate leg table and antique occasional tilt top tables.

Antique gate leg tables are characterized by their hinged leaves, which allows flaps to be supported properly when the gate-leg is rotated through 90 degrees. To provide sufficient strength for the solid drop leaves, the central section is firmly secured to the table frame by numerous glue blocks and often by tenoned joints. This form was adapted in the mid 1700s for tables such as Pembroke tables or drop leaf tables, where the lighter leaves were made making it possible to do veneering on, they were supported by a hinged flap. Tilt top tables have hinged tops, which enable them to be stored away or to the side of a room when not in use.

antique centre tables or antique tripod tables during the 17th century, and on larger breakfast and dining tables of the late 18th and 19th centuries, (tilt top tables) were supported on parallel bearers (cross stretchers), which are hinged to the top of the pedestal support by wooden or, on later pieces, brass screw pegs or pins. The tops were designed to be removable for storage or travelling. Some of these tables have a hinged birdcage attached to the top, consisting of two parallel platforms joined by columns, through which the top shaft or column could be inserted and then fixed by a wedge to the neck. Other 18th century tripod tables display a turned wooden screw that fixes the shaft to both top and tripod base; the legs are often bound together by a metal base. 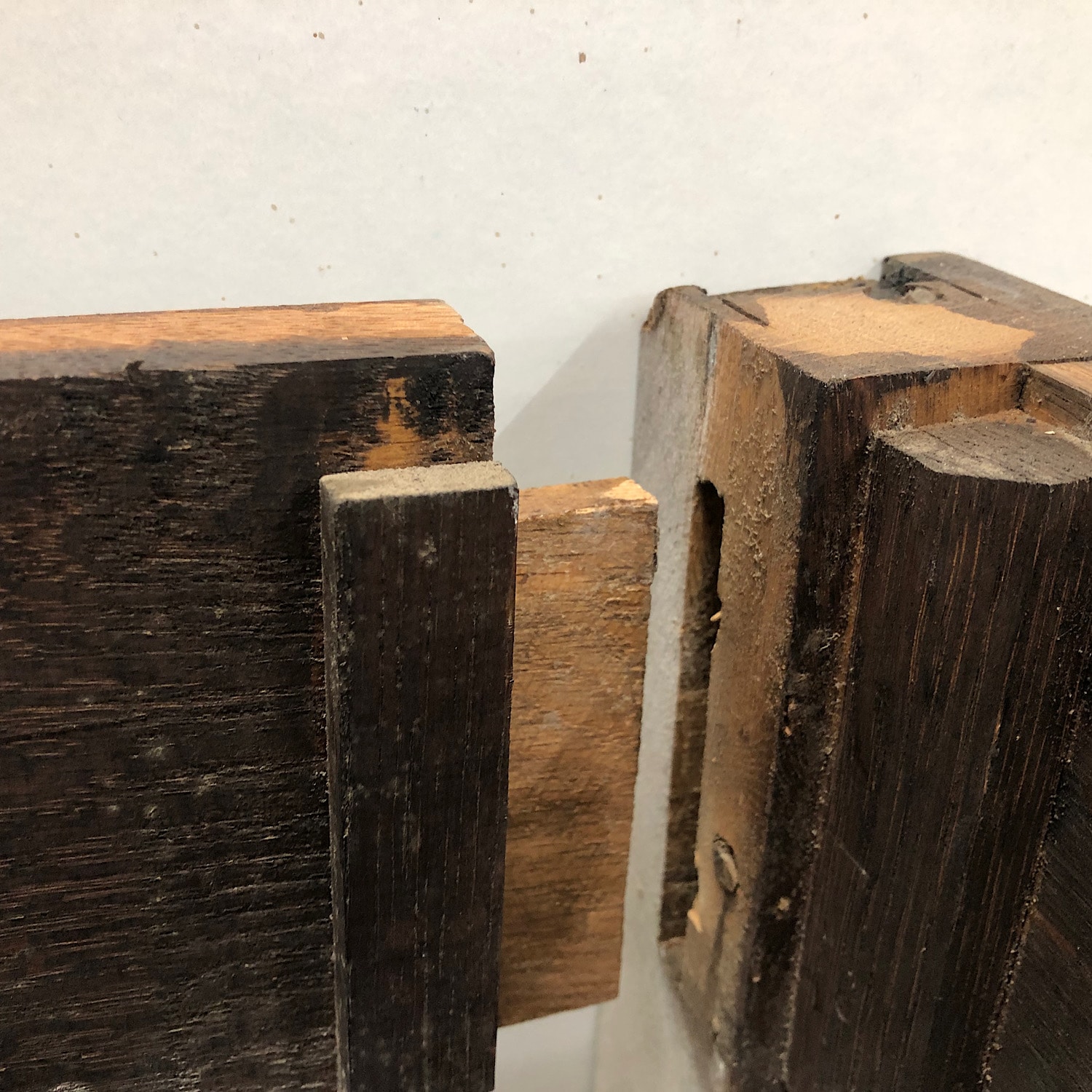 Up to the early 18th century, most early English antique furniture was ‘joined ‘or ‘pegged’ in their construction, using mortise and tenon joints held together by wooden dowels or pegs, or occasionally clout nails. Early wooden pegs were of irregular or square ended in a tapering form; they acted like wedges and tightened the joints as they were hammered in. Over time, shrinkage can happen to the wood and the pegs can be pushed proud of the surface (this is also a good indication that the piece has not been altered at a later date). Later furniture with Pegs in the 19th century are often machine cut and perfectly round and are either flush with the surface or recessed.

From the early 18th century , pegged construction was mostly stopped in Britain, some other countries still did this type of construction after this date and is mainly associated with continental craftsmanship. The best examples of pegged furniture is in an early antique coffer. Below is an example of an early coffer with old pegged dowel on the top right corner. 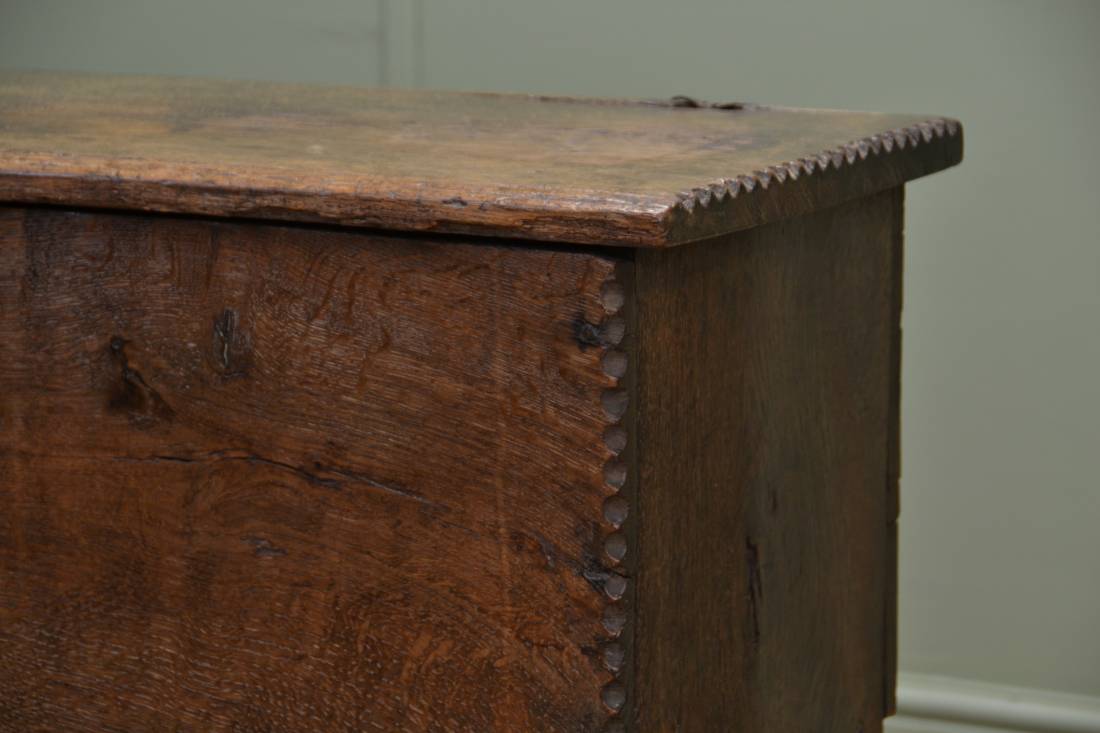 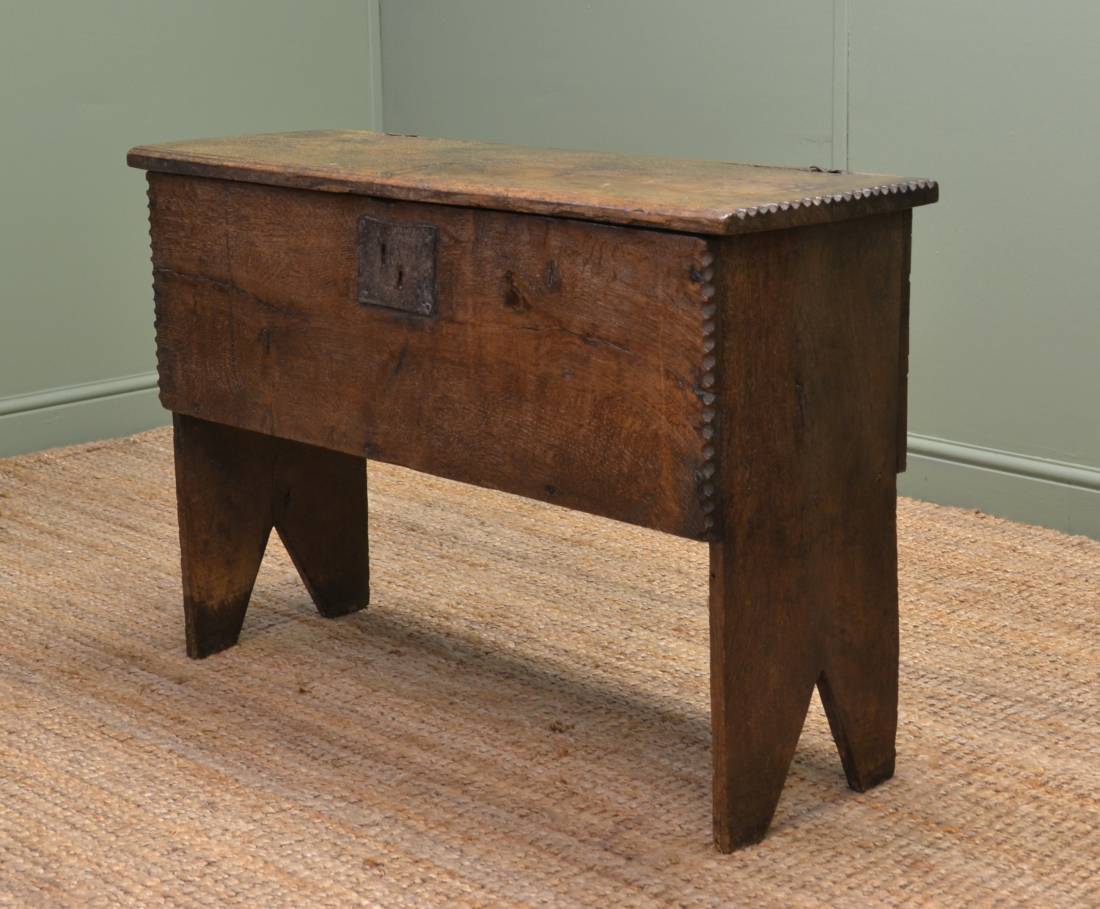 The History of Antique Furniture