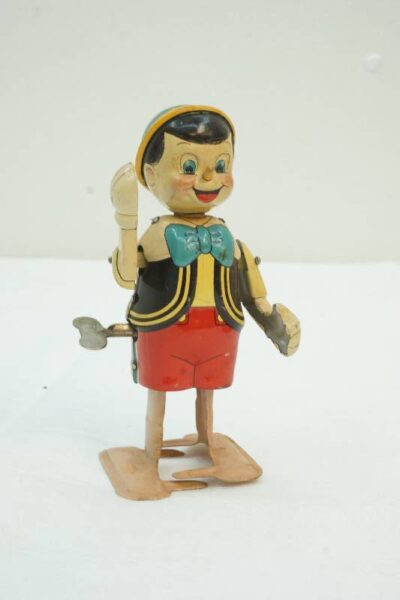 JAX of Benson holds their Coins & Vintage Wind-Up Toys sale on February 21. The hidden gem in this auction is a rare 1950s LineMar by Louis Marx for Disney Pinocchio wind-up toy. The first modern wind-up toys were made in Europe during the 15th century for wealthy aristocrats. It wasn’t until the late 19th century that cheaper tin wind-up toys were made widely available to children. Inside each toy is a torsion spring that stores energy by being wound, then releases that energy as it unwinds, which the mechanisms inside the toy turn into movement.

Our new partner, 888 Auctions, holds their Modern Art, Lithographs, and Antiques auction on February 24 in Ontario, Canada. Our favorite item is a piece of original art by the infamous artist Banksy. The spray paint canvas board comes with a “Dismaland Bemusement Park” certificate. Dismaland was a temporary art project organized by the street artist in England in 2015.

Freeman’s Auctions will hold their “Gilded Age” auction on February 24 in Philadelphia, PA. Our favorite item is a set of nine English pearlware fox and hound stirrup cups. Stirrup cups date back to the late 18th and 19th centuries. Also called a “parting cup” given to guests, especially when they were leaving and had their feet in the stirrups. It is also the traditional drink (usually port or sherry) served at the meet, prior to a traditional foxhunt.

Hindman Auctions holds their African-Americana sale on February 23 at their Cincinnati, OH, location. Our favorite item is a CDV photograph of Fredrick Douglass. The carte de visite (visiting card), abbreviated CDV, was a type of small photograph patented in Paris in 1854. Such photograph cards were commonly traded among friends and visitors in the 1860s. Albums for the collection and display of cards became a common fixture in Victorian parlors. The immense popularity of these card photographs led to the publication and collection of photographs of prominent persons.

Buyers are spoiled for choice at the Lion & Unicorn Collectors Auction on February 22 and 23. Up for sale are beautiful and rare pieces of pottery and ceramics. Our favorite item is a Doulton Lambeth William Rowe Velluma Ware vase decorated with an etched transferred maiden. Velluma is a particularly rare type of ceramic, and pieces in good condition can be hard to find. The body has an almost parchment texture and can be prone to damage. The colors are often quite muted, which adds to the vellum feel of this type of ware. These pieces were fired at high temperatures to enhance the soft effect desired.